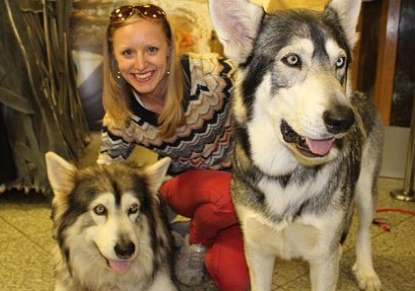 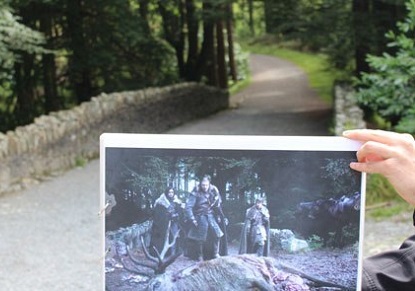 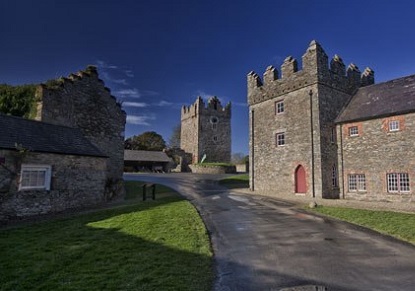 Day tour from Belfast that includes more than 10 locations from Game of Thrones including Winterfell, Riverrun, Robb's camp and a meeting with the Direwolf pups.

Join other fans of the show on this Winterfell Game of Thrones Tour which visits iconic locations located south of Belfast from Season 1 to 7. You will be travelling with a guide who has appeared in the show so we have the insider knowledge other companies can only dream of.

Inch Abbey is a large 12th century ruined monastic site an example of early Gothic architecture. ‘King in the North’: Following the news of Eddard Stark’s death, the North decided to bend the knee to their own Northern King. This is the ruin where King Robb ‘The young wolf’ was crowned ‘The King in the North’. This is a picturesque place to visit on the first part of the tour.

The next stop will be Tollymore forest park – Ireland’s oldest pine forest – to see the very place where the Direwolf pups were discovered, and where the White Walker ambush took place. This stunning woodland in the heart of the ancient ‘Kingdom of Mourne’ is most famous for the place the Starks first found their Direwolf pups. Other scenes include the mysterious Wildling massacre by the White Walkers from episode 1. You’ll also see Jon and Tyrion’s tree, where they discuss life at the Wall. Make sure you bring good shoes as this section of the tour contains a 3km walk through the forest.

Lunch (not included in tour price) will be taken at a traditional Irish pub with quality, good value, Irish themed food (Costs approx £10).

As this is no ordinary tour you will get to meet the dogs Odin and Thor who played the Starks’ Direwolf pups. This will make your friends very jealous!

Castle Ward estate is an 18th century mansion, noted for its unique architecture and its historic farmyard and for having been used as the location of Winterfell. You’ll see the gateway to Winterfell’s court yard, plus over 10 Game of Thrones filming locations portraying Westeros from the Riverlands to battle fields and more. Memorable scenes include Jamie and Briene of Tarth leaving Rob’s camp on their way to Kings Landing. You’ll see the notorious Twins home of Lord Walder Frey, Tyrion and Bron’s first meeting after their trial in The Eyrie. Even the Tree under which King Rob Stark and Tulisa spoke their wedding vows.

It’s time to escape back to your own world, before any more chance of harm befalls you.

Please note that this Winterfell Game of Thrones Tour is not wheelchair accessible.

The Game of Thrones series includes adult content and is rated 18+ in the UK and Ireland. This tour includes walking treks, often over uneven surfaces, and real stage props are kept on the coach. Accordingly, children under the age of 12 are not permitted to join this tour and this is why there is no children’s ticket price. If you purchase a ticket for a young person aged between 12 and 17, you must email us a written waiver from the parent or guardian travelling with the child. Please email us stating your order confirmation number and the young person’s age.

Game of Thrones Winterfell Tour from Belfast with Direwolves


Game of Thrones Winterfell Tour from Belfast with Direwolves

Such an amazing day you get to visit the most beautiful places and live a bit of the game of thrones life.


Game of Thrones Tour with Castle Ward and Direwolves

The people who looks after us, our tour guide Andrew and Ian our driver couldn't have been nicer. It was a lot of fun to see all the locations and meet the dire wolves. The places we visited were very beautiful. Andrews stories about his experiences as an extra on Game of Thrones were so interesting.


B22: Game of Thrones Winterfell Tour from Belfast