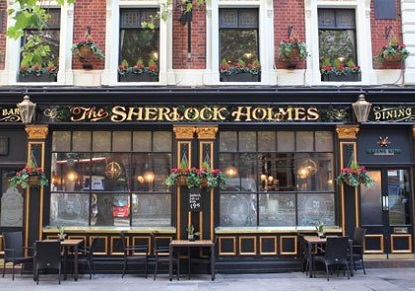 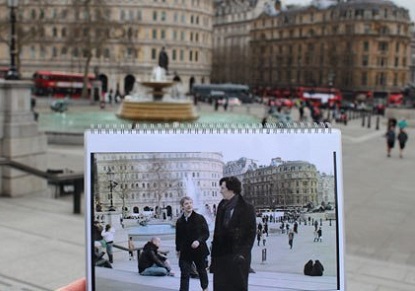 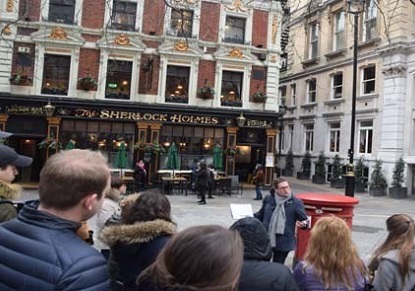 Two hour guided walking tour of film locations and literary sites and inspirations from the book, film and TV adventures of Sherlock Holmes.

Grab your deerstalker, as you embark on a Sherlock Holmes Tour of London, exploring places featured in the books, real sites that inspired Arthur Conan Doyle, as well as locations featured in film and TV adaptations of the detective’s great adventures.

This Sherlock Holmes walk is a must-do tour for real fans of Holmes and Watson.

The tour starts at the very place where Holmes and Watson first meet and then takes in literary sites from gentlemen’s clubs to grand hotels featured in some of the novels and short stories, as well as the London that inspired the author of the books, Arthur Conan Doyle.

You get to visit many of the film and TV locations and inspirations in the capital featured in screen adaptations starring Jeremy Brett, Benedict Cumberbatch and Robert Downey Jr. Along the way, you’ll have plenty of opportunities to take pictures and see the locations up-close.

Feel free to dress up as the Master Sleuth himself or any other character in the series (only if you want to!). The Sherlock Holmes London tour finishes at Somerset House on The Strand – but please note that this tour does not include Baker Street as part of the itinerary.

Owing to the nature of the locations visited, this tour is not accessible for wheelchair users or for parents with prams or buggies. All people under 18 must be accompanied by an adult (aged 18 years or over) on all tours.


B38: Sherlock Holmes Tour of London


10.30am Outside the 'Savini at Criterion' restaurant at Piccadilly Circus, London W1J 9HP